On March 29, 2014 an Italian Greyhound defied the odds after a stroke. His life changed in an instant. One minute Ricochet was happily greeting his pet mom as she walked in the door and the next minute he was lying on his side, unable to move and gasping for air. Ricochet had a Fibrocartilaginous Embolism (FCE) stroke.

What is a FCE stroke?

Fibrocartilaginous Embolism is a specific type of stroke. It occurs when a small fragment of disc material inside the spine breaks off and drifts into the spinal cord. An embolism(blood clot) forms which blocks the blood supply. FCE strokes a very pinpointed and typically strike only one section of the spine, although they can happen anywhere along the spinal cord.

“I had been outside and came in a door that’s close to the laundry room. That’s where Ricochet stays while I’m away. Like all Italian Greyhounds he likes to jump when he’s happy and excited. And that’s what he was doing, jumping to greet me, as I went around the laundry room to open the door for him. By the time I walked the 30 feet to the door, I saw Ricochet lying on his side.

He looked like to wanted to cry out, but he couldn’t make a sound. He was having trouble breathing. And then his heart stopped.

I’m a nurse, so I bent down next to him and began CPR. I kept checking to see if his breathing started again and when it didn’t I sent a text message to my husband.

He was close fishing at a nearby lake. When he got home, we quickly put Ricochet in the back seat of our SUV and drove to the nearest vet. I sat next to him so I could continue giving him CPR.

By the time we arrived at the office, Ricochet’s heart started and he was breathing on his own.

I tried to keep a level head during the ordeal even though we didn’t know what was wrong with our dog.

But after the vet techs took him back and another pet owner at the clinic asked if my dog had been “beat up,” I lost my composure and started to cry.”

Ricochet stayed at the hospital through the weekend. The vet thought he had a FCE stroke and he encouraged Renae to euthanize him. But when she visited him, he lifted his head to greet her. She decided to disregard the vet’s advice and brought Ricochet home.

The next exam came from their personal vet who ruled out a head injury and any orthopedic problems. He then consulted with a veterinary neurologist and together they agreed Ricochet had a FCE stroke that occurred high on his spine near his neck. That explained why his heart and breathing were affected.

He was prescribed steroids and lots of physical therapy.

At first Ricochet couldn’t move on his own. His only sign of sensations came when the vet or Renae pulled on his hind legs. He would pull them back and tuck them close to his body.

Renae started him on physical therapy that she did from their home. She began with range of motion exercises to get Ricochet’s limbs moving. And she worked on stretching the muscles in his legs.

Renae also used a towel as a sling under his torso to stand her dog on all four legs. Her goal was to keep him in a normal upright position whenever possible.

In between his physical therapy, Renae set a mattress on the floor with baby gates on all sides. It kept Ricochet safe from injuring himself and protected his skin from pressure sores. Little by little Renae noticed her dog moving around on the mattress.

Then one day, before she had a chance to put up the baby gates, Ricochet dragged himself off the mattress and into another room.

Ricochet’s recovery was slow. First he regained control of his front legs and then his hind legs began to work. Then one day he walked on his own.

Renae explained a FCE stroke wasn’t the first hurdle for her little greyhound. He was born at a puppy mill and rescued when he was 9-weeks-old.

Now at nearly 11-years-old, Ricochet walks, runs and goes for hikes on the trails around his home. His gait still shows signs of his stroke, but he keeps up with the rest of his doggie housemates.

Would You know If Your Dog Had A Stroke? 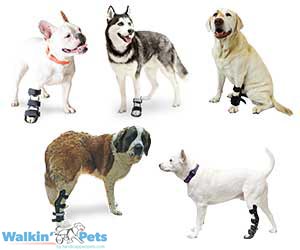