This story is a little bit of a teaser. I am trying to schedule an interview so I can get the details, but the initial news was too exciting not to share. Cindy Fink, who is President of the nonprofit group, Finding the Cure for DM Foundation (FCDMF), sent me a message about their research project. The “New Hope Study” will silence genes to cure DM Dogs. Degenerative Myelopathy (DM) is an incurable, progressive disease of the spinal cord in dogs. It leads to paralysis and eventual death. DM is a heartbreaking condition.

FCDMF has been contributing to DM research over the years, but the ultimate goal of these clinical trials is to find a cure for ALS (Amyotrophic Lateral Sclerosis) in humans. ALS and DM have many similarities. Then last year in 2016, a study found a big difference in the two diseases that gives promising “new hope” to DM patients.

Silencing the genes in DM dogs

A clinical trial was conducted to silence two genes called SOD1 and DLA-DRB1 in both canine and human patients. While the results for ALS patients were not significant, dogs in the study had promising improvements. That led FCDMF to pull together funding for a trial specifically tailored for DM dogs.

Click here to read more about Degenerative Myelopathy in dogs.

DM is not completely understood, but researchers believe it is driven by mutations in the SOD1 gene. That has led to trying to find a way to silence the disease-causing genes through drug therapy. The New Hope Study will work on developing formulas to silence SOD1 in a dog’s nervous system.

FCDMF has contracted with scientists at Silagene, Inc., which is affiliated with Rutgers University and Dr. Natasha Olby, Professor of Veterinary Neurology and Neurosurgery at NCSU. Silagene will make the test material. The actual clinical trial with dogs will be conducted at NCSU.

Cost of the study

Each member of the clinical trial team has agreed to cutting costs and donating much of their time and services.  Still, the overall cost of the study is $38,000. It covers the material and lab procedures. FCDMF has raised $22,000. That enables them to begin the first part of the research.

The organization is still trying to raise funds for the next part of the study.  You can read more about FCDMF and New Hope here.

Click here to read about another study being conducted for Degenerative Myelopathy Dogs at the University of Missouri. 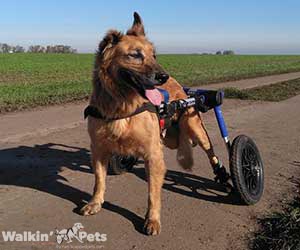